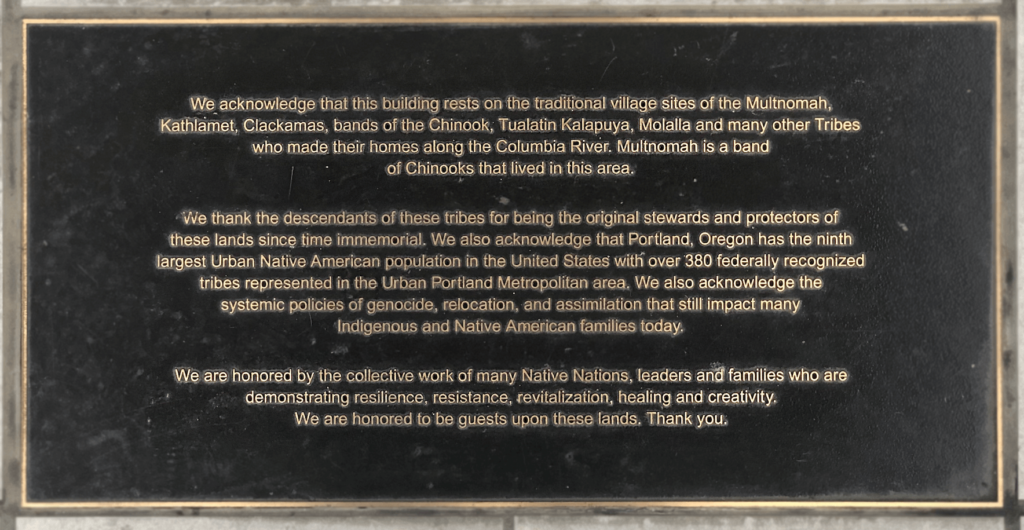 Oregon Food Bank stands with Indigenous People across the country to recognize and raise awareness of National Day of Mourning. In marking this day, we aim to see Thanksgiving from the perspective of the first stewards of the land — and begin to correct false histories and heal some of the harm done through celebration.

The United American Indians of New England declared the first National Day of Mourning 50 years ago:

“Since 1970, Native Americans and our supporters have gathered at noon on Cole’s Hill in Plymouth to commemorate a National Day of Mourning on the US Thanksgiving holiday. Many Native Americans do not celebrate the arrival of the Pilgrims and other European settlers. Thanksgiving day is a reminder of the genocide of millions of Native people, the theft of Native lands, and the relentless assault on Native culture. Participants in National Day of Mourning honor Native ancestors and the struggles of Native peoples to survive today. It is a day of remembrance and spiritual connection as well as a protest of the racism and oppression which Native Americans continue to experience.”

For generations, we have been taught a one-sided story of Thanksgiving. Through school and media alike, we have been told that this holiday commemorates the peaceful arrival of English settlers who held a three-day feast with the Wampanoag tribe in 1621. We made Indian headdresses, participated in reenactments in classrooms and joined our families to eat a Thanksgiving meal while ignoring the full truth of our past.

We highlight this often-invisibilized and denied truth to honor each other’s history, to increase understanding, and to strengthen relationships that heal and grow our capacity to solve collective problems – such as hunger. Pre-pandemic, Black, Indigenous and other people of color were disproportionately suffering from poverty and food insecurity.

In Racial Wealth Snapshot: American Indians / Native Americans the National Community Reinvestment Coalition describes the massive disparity in the distribution of wealth between Native Americans and the rest of the country’s population:

In the midst of a global crisis, BIack, Indigenous and other people of color are bearing the brunt of the pandemic, exacerbated by the struggling economy and uncoordinated efforts to control the spread of COVID-19.

At Oregon Food Bank we lift these truths to inform and guide our efforts to eliminate hunger and its root causes, to ensure resources reach our hardest-hit communities, and to work as efficiently as possible with the resources we are trusted with. We also acknowledge that our work takes place on Indigenous land, where our buildings stand today. Though our journey toward decolonization and indigenization is in its infancy, it has already revealed hidden stories and intersecting paths.

This year, the United American Indians of New England will host a virtual National Day of Mourning. Watch the live-stream from Plymouth on Thursday, November 26 at 9AM PST (12PM EST).

Some of us will be in Plymouth. For everyone who won’t be there, the livestream and pre-recorded content for the National Day of Mourning on November 26 will be posted at the United American Indians of New England (UAINE) website (www.uaine.org), at the UAINE facebook group, and at https://hate5six.com/ndom.

Find additional stories below from Indigenous leaders laboring to heal communities while addressing the false narratives of Thanksgiving, invisibility and stereotypes:

Inside the Network: Creating a World In Which Hunger Never Happens